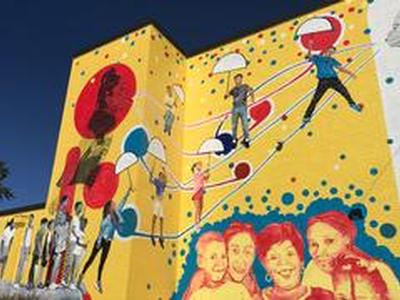 Pepe Gaka loves working outdoors. That’s why the artist prefers creating murals instead of painting in a studio.

“I like to be outside, to be with people and talking to people,” Gaka said during an interview outside Stonewall Recreation Center, where he’s creating a mural on its building facing North Main Street in Danville. “You’ve got the building as the canvas. You get to meet people.”

Gaka, 34, a native of Italy and based in Hot Springs, Arkansas, has painted murals all over the world — he’s been working on the mural at Stonewall for more than two weeks and expects to finish it soon.

The unfinished mural covers an entire side of the two-story building and so far includes yellow, red, black and blue colors on a mostly white background, with the outlines of children stretching above one of the center’s parking lots. When it’s finished, the mural will depict children floating toward a better future using opened umbrellas.

In Gaka’s mind, the mural is about the surrounding Camp Grove community and the children who visit the center every day.

“This is a community center,” Gaka said Wednesday while sketching the beginnings of a second mural along a brick wall along Bradley Road. “It’s for the children. The children are the reason why the center is here. They’re the future of this community.”

Gaka has painted about 30 murals in the U.S., Canada, the United Kingdom, Pakistan, Japan, the Philippines, Australia, New Zealand and Italy.

“I have been a professional, full-time artist since 2012, and I have been focusing on murals for the last three or four years,” Gaka said.

Featured in the mural are children from the center and is meant to to bring pride to the community, said Wendi Goods Everson, senior program officer with the Danville Regional Foundation.

The foundation is providing a $25,000 Make It Happen grant for the project, which covers not only the mural but community engagement and an upcoming event to celebrate the mural, Everson said.

Funding for the project is part of the foundation’s Opportunity Neighborhood’s Initiative to improve North Danville, she said.

“We’re trying to improve the economic outcomes for children and families in those neighborhoods,” Everson said.

The Danville Neighborhood Development Corporation applied for the grant on behalf of a group of residents in north Danville.

“The purpose of projects like this is to get residents excited about what’s possible in their neighborhood,” said Ernecia Coles, executive director of the neighborhood development corporation.

Judy Fallen, recreation supervisor at Stonewall, said the project is something to engage and inspire youth. There are many young people motivated by seeing brown faces in the mural, she said.

“It’s about really tapping into this community and letting people know they’re valued and celebrated,” Fallen said. “A whole lot of people are looking at it and talking about it. It’s giving a positive message to the community.”

Stonewall Recreation Center, at 119 Bradley Road just off North Main Street, has been around for more than 30 years and used to be an elementary school. It has served all types of children over the decades and those from all over the city are welcome there, Fallen said.